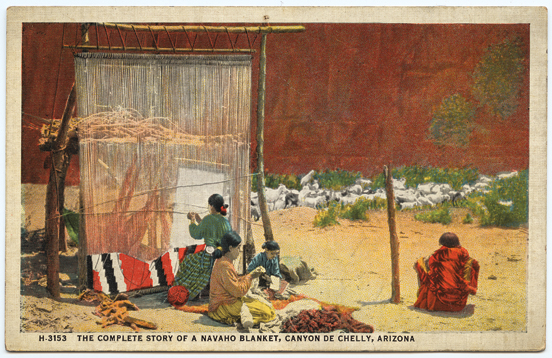 “A Digital Path to the Past” in Southern Methodist University Libraries’ Browsing Forward magazine:

This article outlines the Digital Humanities project I developed and currently edit and features one of the postcards digitized for the collection, “The Complete Story of a Navaho Blanket, Canyon De Chelley, Arizona,” ca. 1915. Held in the DeGolyer Library’s Fed Harvey Company Collection.

A review of a panel that I co-organized with Sigrid Anderson Cordell for the 2014 American Studies Association Meeting.

“The ‘Pre-Occupation’ of the American West: Imagining a Native Past” panel examined representations of the first peoples of the Americas and the temporal-spatial imaginaries to which they are often consigned. Sigrid Anderson Cordell explored how journalist Charles Lummis’ ethnographic work on indigenous nations of the American West championed white male academic expertise and undercut indigenous women’s claims to knowledge and authority. Regarding photography as a means of shaping narratives about cultures, Colleen Marie Tripp interrogated how the filmic material that accompanied lecturer Charles Hall’s “lantern show” made and unmade conceptions of race in the American West. Carrie Johnston evaluated how Alice Corbin Henderson’s poetry–used as marketing material for rail tourism–presents “Indians” as a sign, demarcating an authentic frontier space apart from the “settled” American landscape. Christen Mucher observed that framing the pre-Colombian mound complex in Miamisburg, Ohio as part of the state’s “prehistory” renders its builders and inhabitants, by association, pre-Ohioans. The forcing of the Ohioan mound-builder nation from the main current of Anglocentric regional history mirrors and recapitulates the spatial dislocations of forced removal and extermination.